Cars Versus E-Bikes: The Future Of Transportation With Magnum Bikes

Back to What's New

Cars Versus E-Bikes: The Future Of Transportation With Magnum Bikes

Whether you drive everywhere, take your car to work, or just use it for errands, you’ve probably noticed that gas prices have been awfully high lately.

In the US, the cost of gasoline surged past previous records set in the 2008 economic crisis, reaching an average of more than $5 per gallon in June 2022. Now consider that the national inflation rate soared to 9.1% year-over-year in that same month. It’s no wonder that our personal transportation budgets — and our household budgets overall — are feeling the pain.

We also already know that the transportation options that rely on gasoline have an impact on our planet. We know we should do our part to help. Maybe we’ve thought about it, but been worried about how much more we’d need to stretch our budgets to make a change.

What if cutting back on your car usage could help the planet while also saving you money?

Skip ahead to our video on the topic, or read on to see how e-bikes make this possible.

E-Bikes And Your Carbon Footprint

Many people like to look at transportation in relation to miles per gallon because that’s what we’re used to. An e-bike nets you on average over 1,000 miles per gallon. In comparison to cars, an e-bike is dozens of times more efficient than a car is.

That’s Magnum Bikes' COO Jesse Lapin, and he’s not wrong. On top of excellent “gas mileage” so to speak, the carbon footprint of an e-bike is unmatched.

Though not nearly as much as gas-powered vehicles, both traditional bikes and e-bikes generate emissions in the form of:

But if you guessed that the environmental impact of those things is far less than for gas-powered transportation, you’re right. 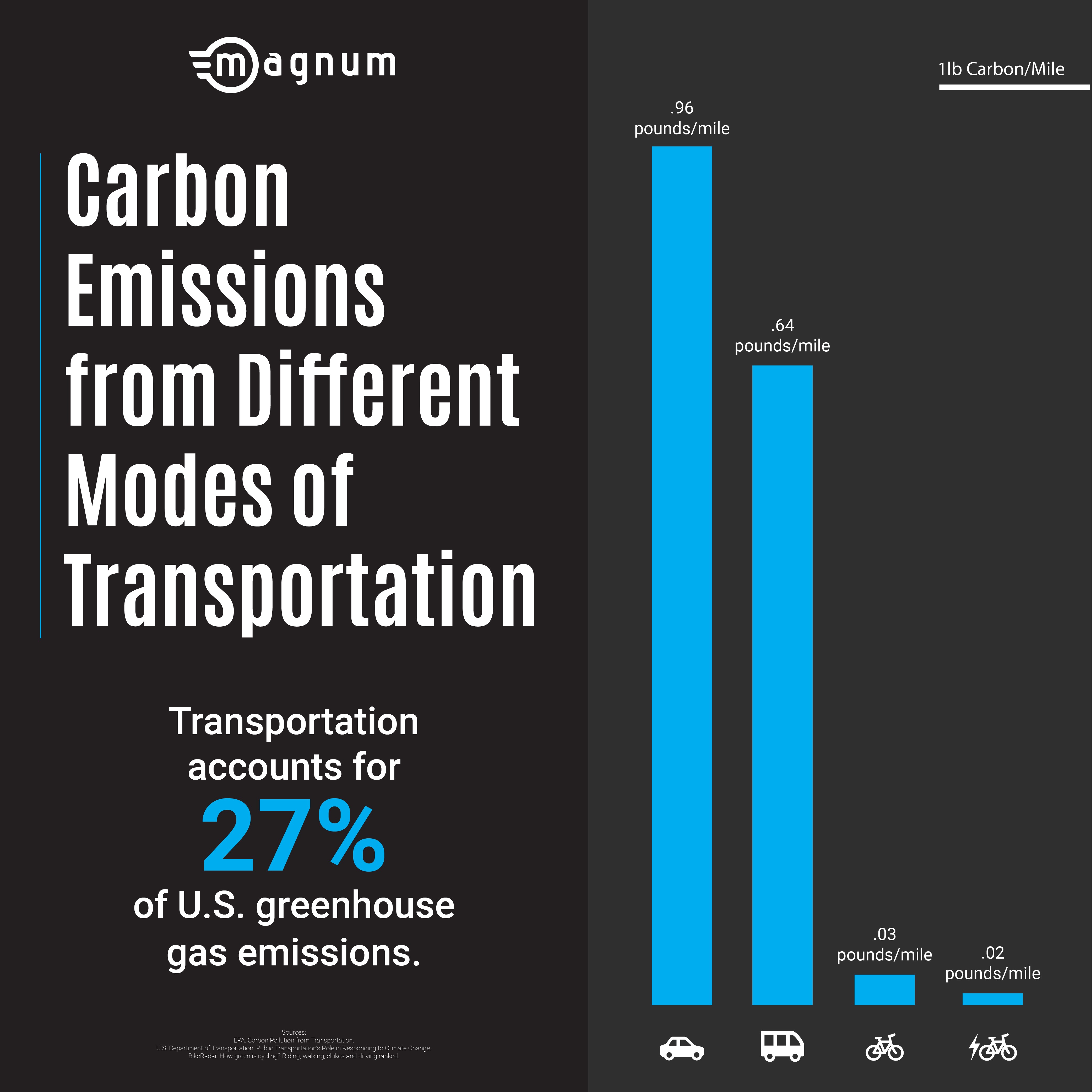 So why do e-bikes have lower carbon emissions than traditional bikes?

Pedal assist systems use the rider’s pedaling power to activate a motor that amplifies their effort. Because of PAS, e-bike riders need slightly less food to fuel their rides compared to traditional bike riders.

Okay. So e-bikes have great “gas mileage” and an incredibly low carbon footprint. But aren’t they expensive?

How Much Do E-Bikes Cost Vs. Cars? 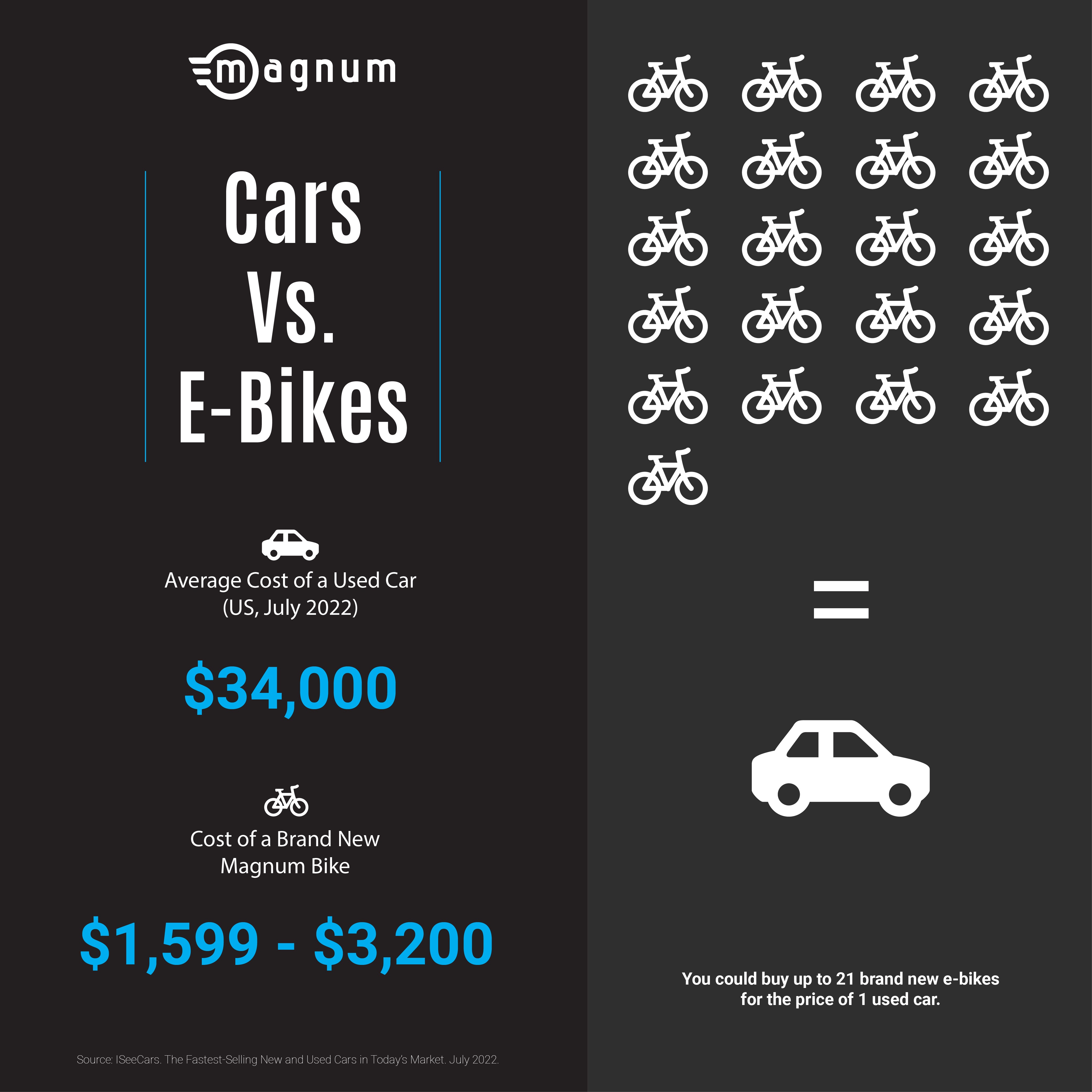 You could buy 21 new Magnum Bikes for the price of 1 used car.

Plus, you can start riding an e-bike now and pay later. You can buy an e-bike with interest rates as low as 0% and payments as low as $100/month.

CEO Yoni Kayman frames it like this: “At Magnum Bikes, our mission is to make e-bikes affordable and accessible to as many people as possible.”

Curious what your monthly e-bike payment could be? Get a quote with no hit to your credit score.

E-Bikes Are Changing The Future Of Transportation

In addition to reducing carbon emissions, dodging high gas prices, and providing widespread affordability in transit, e-bikes offer a riding experience that’s unlike anything else — including traditional bicycles.

It no longer becomes this obligation that you’re stuck in traffic, you’re moving a three- or four-thousand-pound car, looking for parking, getting overwhelmed with that … You’re actually experiencing the outdoors. So emotionally and mentally, it’s invigorating.

That was CEO Yoni Kayman again, conveying the incredible power of e-bikes for transportation. Yoni goes on to sum it all up like this:

That’s a future we can get behind. What about you?