Back to Magnum Academy

If you’ve ever ridden an e-bike, you already know that they’re an empowering, exhilarating, and efficient way to get around or just have some fun. But if you could be rewarded for having all that fun… well, why wouldn’t you?

Places all around the world are beginning to offer incentives for citizens to purchase e-bikes, including lots of locales right here in the US.

Feel free to jump ahead:

What Are E-Bike Incentive Programs?

So why would governments and energy districts give money back to new e-bike owners?

E-bikes don’t directly rely on fossil fuels like gasoline or diesel for power, and the relative carbon footprint for their manufacture and battery recharging is less than for automobiles — including electric vehicles.

As of October 2022, there have been 74 regional and local e-bike incentive programs in the US, with 14 more in Canada. This includes programs that have already closed as well as those that are still in the proposal and approval stages.

However, while some have been proposed, there currently aren’t any federal e-bike incentives in the United States.

Interviewed for Bloomberg, Caron Whitaker, the deputy executive director of the League of American Bicyclists, said, “When members of Congress think about e-bikes, they think about recreation.” And while there is a $7,500 federal tax credit for electric car purchases, it seems that the idea of e-bikes replacing cars for commuting, errands, and everyday use isn’t yet mainstream enough to codify a federal incentive program.

Let’s learn more about the environmental impact of motor vehicles and passenger EVs versus e-bikes. 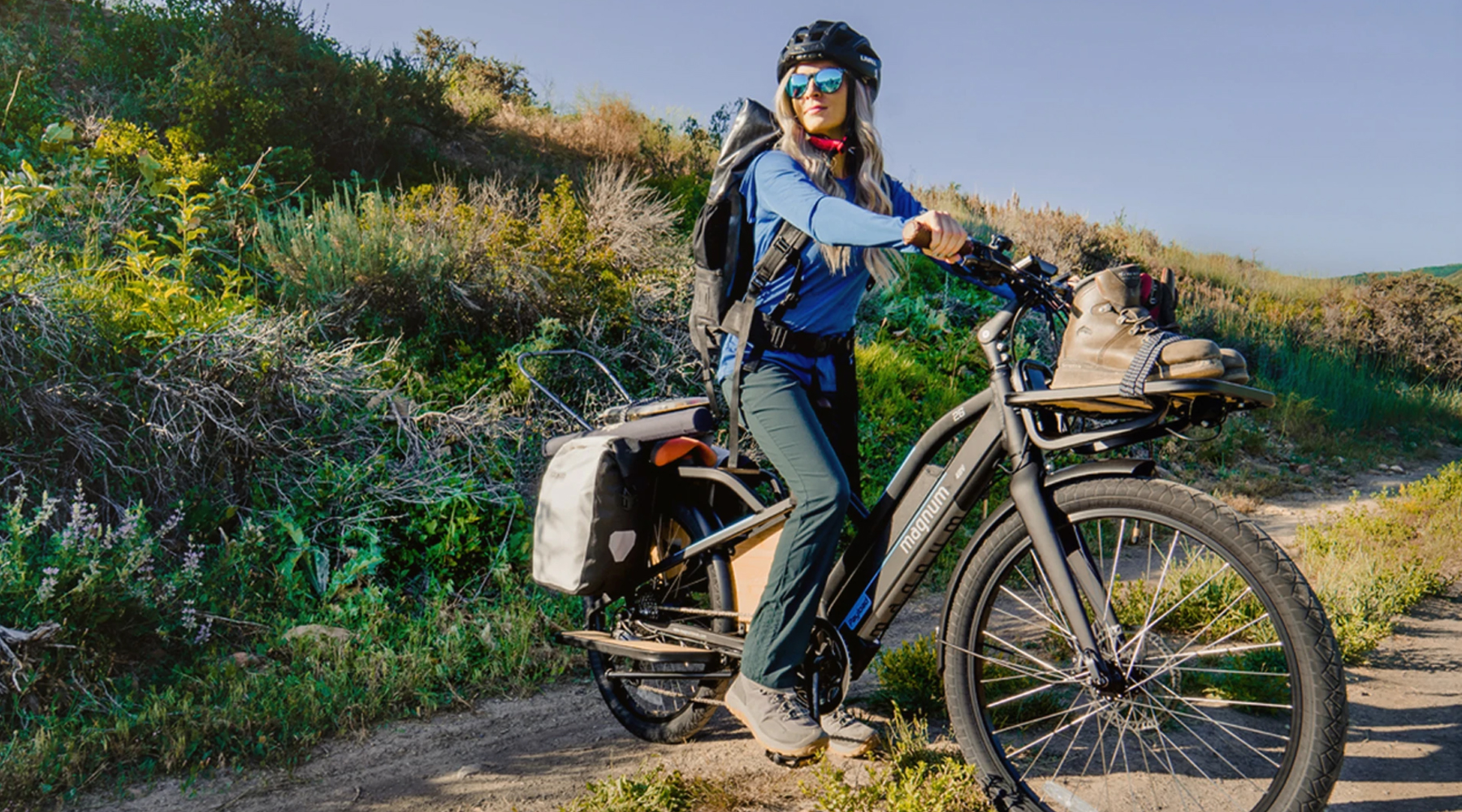 As if the great outdoors isn’t enough of an incentive to get an e-bike, there may be monetary incentives in it for you, too. Pictured: Magnum Payload.

How Do Electric Bikes Affect The Environment?

If you think we take a lot of trips on a daily basis, you’re right. Americans take 1.1 billion trips every single day — that’s 4 trips per day for every person the in the US.

With all those trips to make, starting up a car may just feel like the easier choice in the moment. No pedaling, no sweating, no problem.

This means that half of the vehicle trips that Americans take daily could be completed with a bike ride of 15 minutes or less.

And quick trips or not, all those trips are tough on our environment. 58% of all transportation-related emissions in the United States come from passenger vehicles. In fact, transportation is responsible for more greenhouse gas emissions than any other economic sector in the country.

How Much CO2 Do Electric Bikes Produce?

Nearly all of our daily trips (87%) are made in personal vehicles, which emit 0.96 pounds of carbon for every mile traveled. Compare that to just 0.02 pounds of carbon emitted per mile on an e-bike, and the environmental benefits of e-bikes become quite clear. 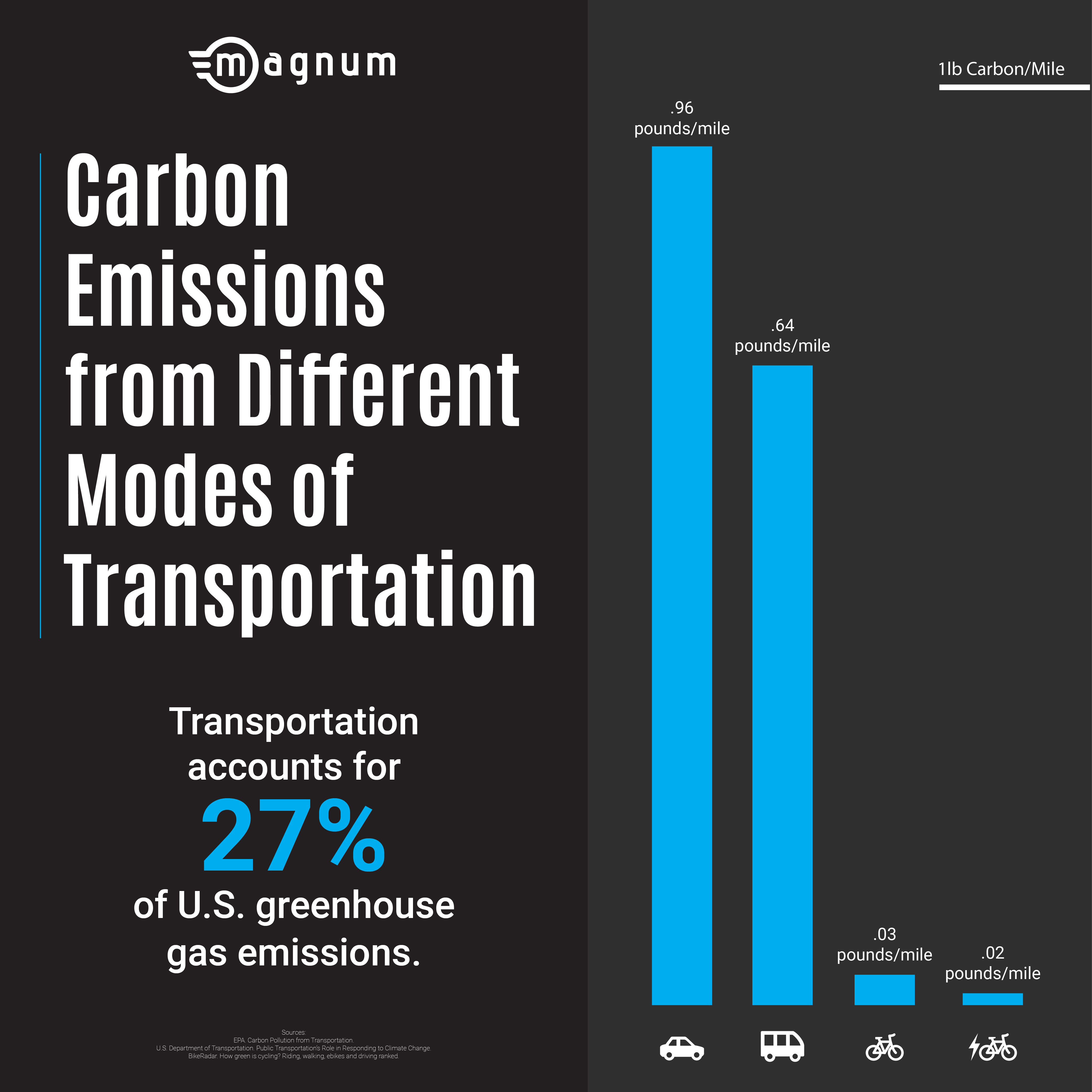 Here’s how e-bike emissions stack up compared to cars, buses, and even regular bikes.

But don’t “analog” bikes save emissions, too? Definitely! Standard bicycles don’t even require charging a battery like e-bikes do. But e-bikes have been found to inspire longer and more frequent rides compared to traditional bikes, compounding their power as a carbon-fighting method of transportation.

And in most cases, thanks to motors, throttles, and pedal assist systems, e-bikes get people where they want to go on an e-bike faster than a conventional bike.

Check out our post, Cars Versus E-Bikes, for more comparisons of personal vehicles, e-bikes, and other forms of transportation.

With this massive difference in emissions between different modes of transportation, researchers have found that even a modest increase in e-bike usage for Americans’ daily trips could make a huge impact.

A Portland State University study found that replacing a car trip with an e-bike trip just 15% of the time — still using cars the other 85% of the time — would reduce the city’s greenhouse gas emissions by 12%.

In that scenario, every e-bike on the road in this scenario would prevent 496 pounds of CO2 emissions each year. That’s the emissions equivalent of saving half a barrel of oil per e-bike per year.

The list of proposed, approved, active, and closed e-bike incentive programs changes all the time! But the Transportation Research and Education Center (TREC) at Portland State University is keeping a regularly-updated list of such programs across the US and Canada.

We recommend checking out their E-Bike Incentive Programs of North America Tracker for the latest information!