3,127.6 miles across the country. 71 days running from the moment I woke up, until my body couldn’t go anymore. I left it all out on the road.

This is the story of The American Runner: a man who broke the world record for most consecutive ultramarathons. And he couldn’t have done it alone.

When most of us think about “seeing the country,” we imagine plane rides and road trips. But that’s not what Jordan Moon had in mind. As an ultrarunner, Jordan’s lifelong dream was to travel across the US on foot.

And in the spring of 2020, he got that chance when he sold his Atlanta-based business. With no job holding him back, the timing was never better to commit to his goal. He just needed a change of scenery to make it happen.

“I had a list of 5 cities to possibly move to, and I ended up choosing Park City, UT,” Jordan recalls. Nestled between the Wasatch and Uinta mountain ranges, the city’s 7000-ft. altitude is a low-oxygen environment, helping to improve athletic endurance.

But in his first few months of training, Jordan suffered the devastating loss of a close friend, Rob. Through his grief, Jordan had a revelation: he could dedicate his lifelong dream in Rob's memory. Jordan sprung to action: “Within the week, I called my support crew and said, ‘This one’s for Rob.’”

That support crew consisted of Jordan’s best friends, Cory Clarke and Cody Marsden. In the summer of 2021,the three of them prepared to pay tribute to Rob and see the country from the open road.

Outfitting the Crew with a New Set of Wheels

Since Jordan would be the only one running on foot, the rest of the crew had to consider transportation. They had an RV for shelter and supplies, but it wasn’t realistic to stop the RV whenever Jordan needed water or food. At least one of them needed to stay alongside Jordan as he ran. The answer? A sturdy and durable e-bike.

I shopped, trust-rode, and chatted with every one of them,” he recalls. “One company stood out above all others: Magnum e-bikes.

Jordan spent three days at the expo with the Magnum team, riding every model we had. “A friendship and a bond was formed those few days at The Big Gear Show, and Magnum became part of the journey,” he says. “I knew they were the company I wanted to purchase my e-bike from.”

Our team was honored to be a part of the journey. “The owner of Magnum decided to sell the bike to me at cost,” Jordan marvels. “We got so lucky!”

But the Magnum crew didn’t stop there. We invited Jordan, Cody, and Cory to the Magnum headquarters in Salt Lake City, just over 30 miles from Park City. Our mechanics helped them plan for all the scenarios the open road might throw at them. Armed with a game plan for any situation, the crew was ready to ride together.

Time to Hit the Open Road

On September 2, 2021, at 3:33am, Jordan and his crew headed out from City Hall in San Francisco, CA. The first leg of the journey wasn’t easy. In the first 3 days, the group wound through the Sierra Nevada mountains, enduring nearly 7,000 feet of elevation gain and 100-degree temperatures.

On Day 4, they stopped to rest in the small town of Dardanelle, CA. It was time to prepare for the biggest test of their run so far: a grueling 27% grade through Sonora Pass. 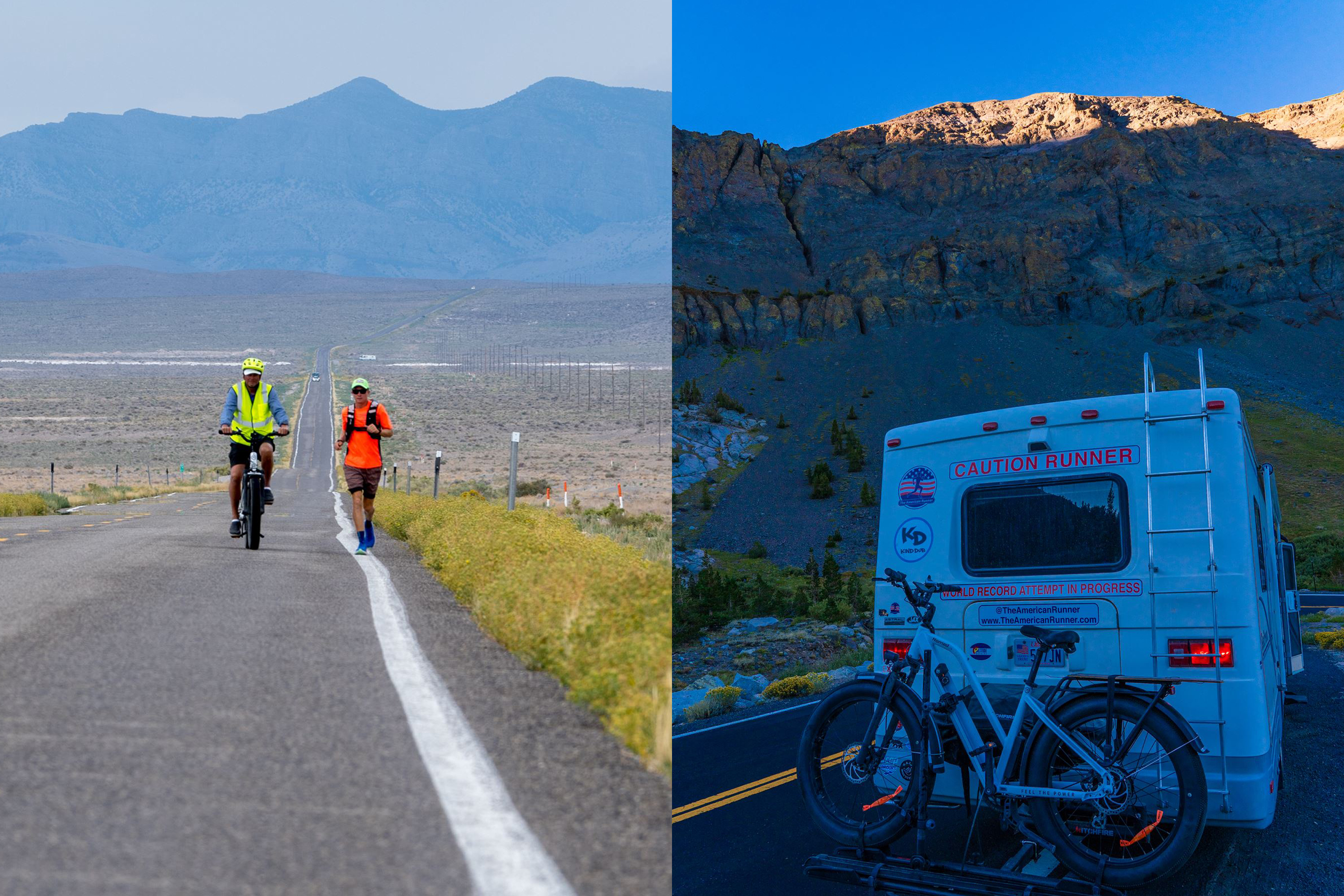 Whether running, riding, or driving, this crew sticks together.

Cory had guided the 33-foot RV across the pass just the week before, and Jordan’s mountainous Park City training routes had prepared him well to run through. So Cody volunteered to navigate the pass on their Magnum Nomad e-bike.

“I know he is the first person ever to ride an e-bike over Sonora Pass,” Jordan celebrates. “An unbelievable feat in and of itself.” The Nomad’s pedal assist helped Cody to ride farther, keeping pace with Jordan through the pass.

The crew averaged 45 miles per day. It was an ideal distance for the Nomad, which can travel up to 65 miles on a single charge. But Jordan’s speed began to slow through Nevada.

I experienced the most pain I have ever experienced in my life. I knew I would be in more pain if I stopped. My crew, my father, and all my supporters lifted me up in times of darkness,” Jordan gratefully recalls. “Nevada brought my dreams down to Earth.

The three friends conquered Nevada and soldiered on. Through breakdowns, injuries, and exhaustion, they continued steadily East. The weeks passed and the road stretched on. They pushed through Colorado. Nebraska. Iowa. Illinois. Indiana. Ohio. Pennsylvania.

“For how bad I wanted to reach New York, I didn’t want it to end,” Jordan remembers. “I was a man on a mission, and I had grown accustomed to pushing hard every single minute of the day. But every great story has an end.”

On November 11, 2021, 71 days after their departure from San Francisco City Hall, Jordan, Cory, and Cody arrived at the end of their journey. This date was no coincidence.

“It was wild to think we were finishing on Veteran’s Day, because I was an Air Force vet,” Jordan says. “Both my grandfathers served in the Marines. And to top it off, it was Cory’s birthday. I told Cory 2 weeks prior, I will give it my all to finish on 11/11, and we did. It was the most beautiful and memorable day of my entire life.” 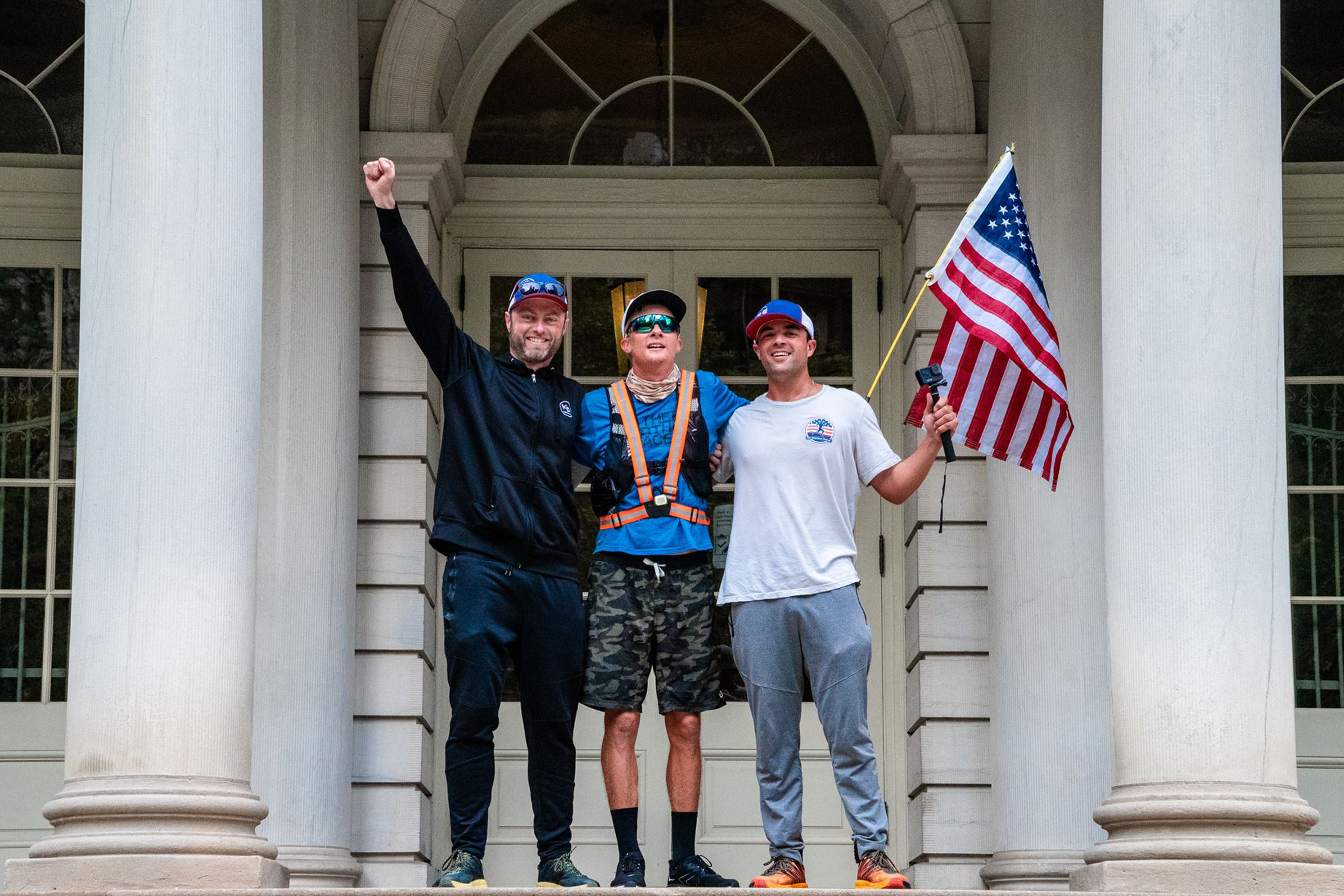 At Magnum, part of our mission is to empower riders to go farther, together. In tribute to their late friend Rob, over 71 days and more than 3,000 miles, Jordan, Cody, and Cory truly embodied that mission. They rode farther together than ever before. The Magnum Nomad allowed Cody and Cory to support Jordan for the whole journey—in ways that would have never been possible with the RV alone.

Join our active community of over 75,000 Magnum Riders.

Your cart is empty!