The Magnum Bikes team attended our inaugural Outerbike event in fall of 2022 — and we got a bit more than we bargained for! More on that in a bit…

What’s Outerbike? It’s a mountain bike demo event set at a variety of bike trail destinations all across the US. Locations include Killington in the lush Green Mountains of Vermont, the 100-mile Duluth Traverse trails in Minnesota, and the red-rock desert of Moab, Utah. Moab is where the Magnum Bikes team got to experience Outerbike for the first time.

Here’s the story of our first Outerbike, which we hope was the first of many more for our team!

The day before the event began, our team showed up to set up our tent and booth near a trailhead. It was a beautiful day in the desert and we couldn’t wait to meet hundreds of mountain biking enthusiasts that weekend. In that spot, we’d be showing off some of our robust Mountain E-Bikes and other rugged models for attendees to test-ride on the trails. 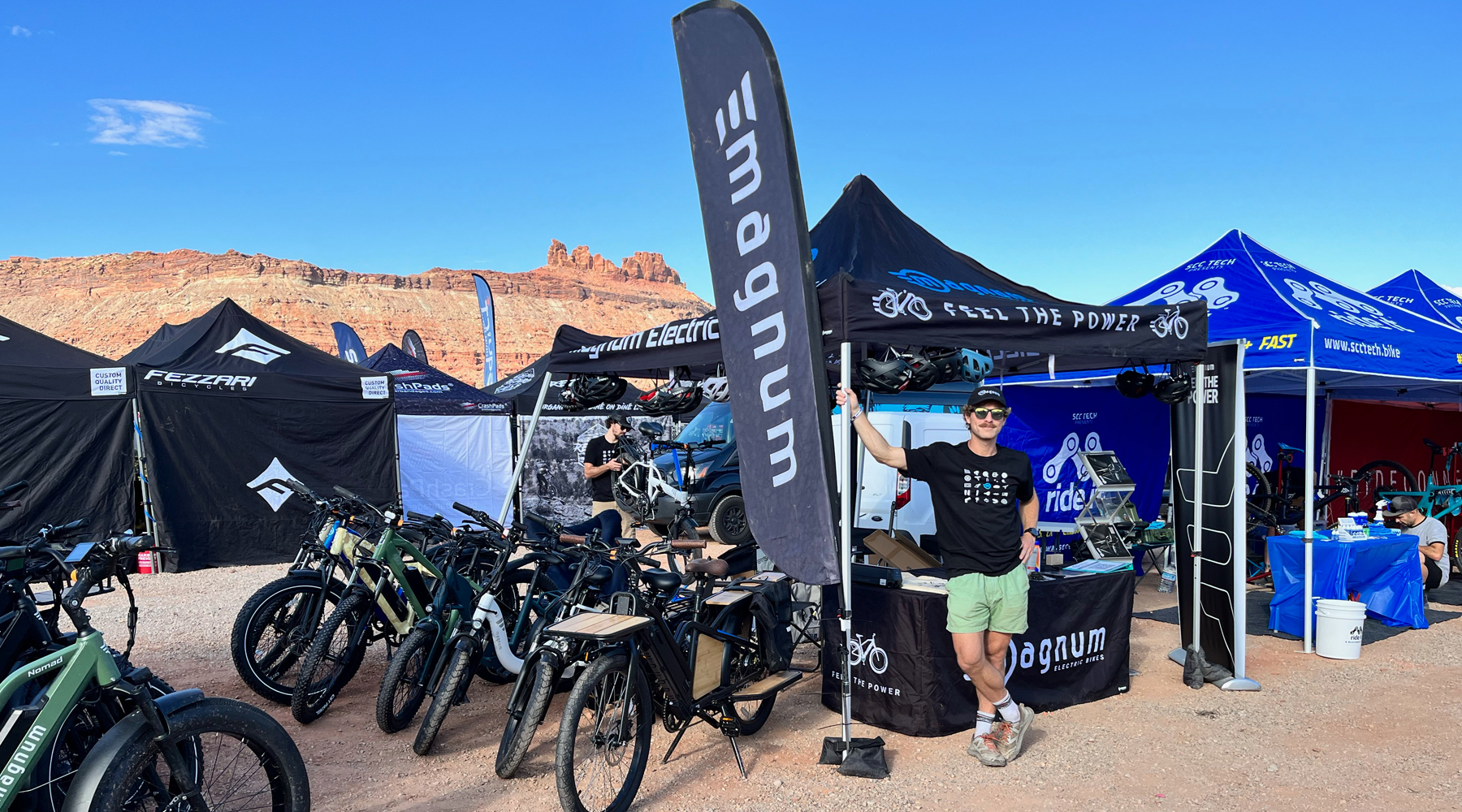 It’s a beautiful day to demo some electric bikes!

Magnum Bikes was the only electric bike company represented at this Outerbike event, so we had something to prove — and we were excited about the challenge.

After setting up the tent, our team headed into town to grab dinner and settle into the hotel. But a few hours later, we got a call from another dealer at the event. The wind had picked up at the event site, and the tent we’d worked hard to set up and prep for the weekend had blown away, suffering some damage in the process. 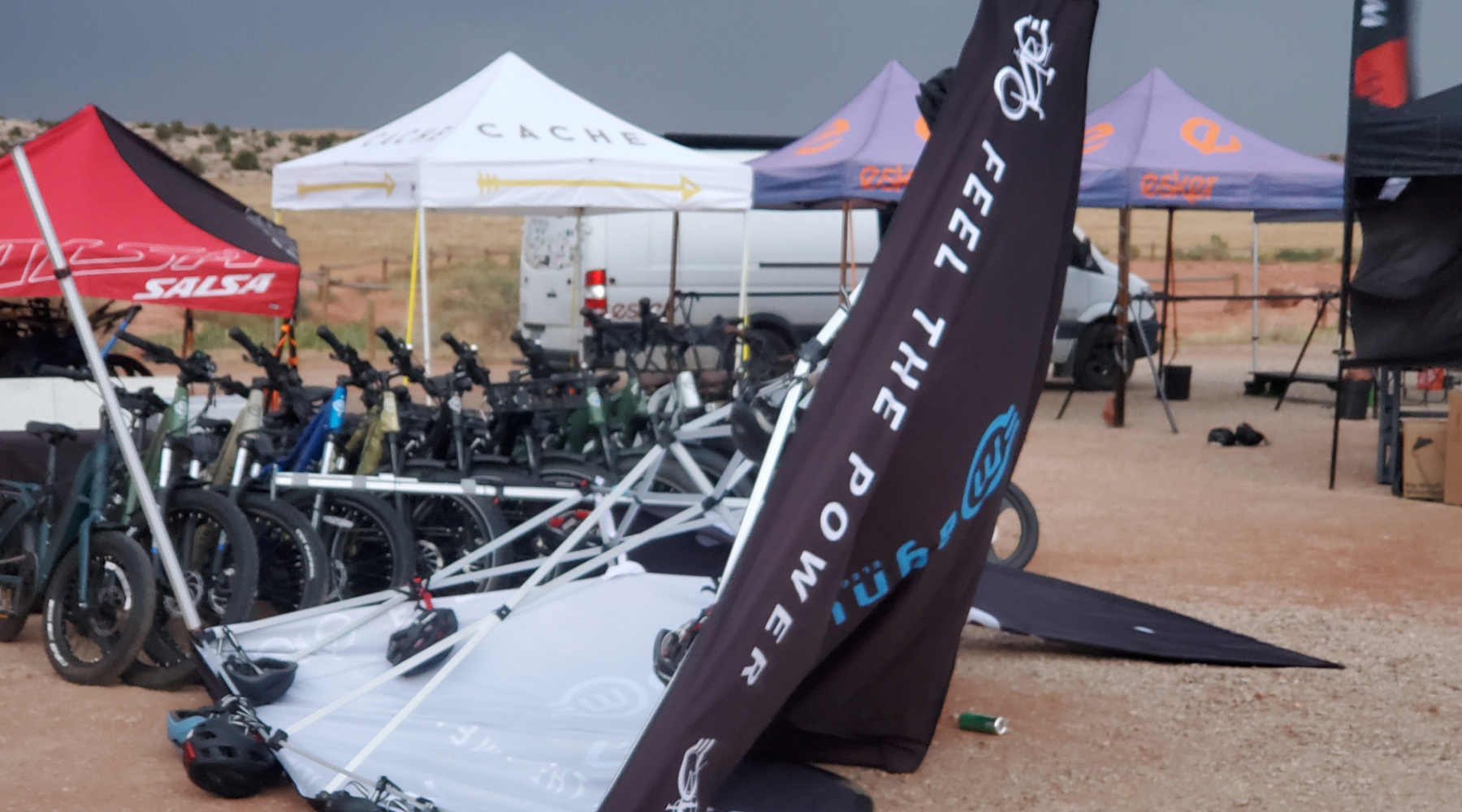 We weren’t the only ones — some vendors’ tents and booths were almost completely wrecked. Our tent was a little worse for wear, but we were able to salvage it to make it through the weekend.

On Friday morning we watched Day 1 attendees rush in, eager to demo the latest mountain bikes they’d had their eyes on. And we’ll admit — electric bikes weren’t on most of their minds. We didn’t take it personally, though! As the only e-bike company in attendance, we knew that we wouldn’t be the main attraction at first.

But as the crowd worked their way through their analog test rides, they started getting curious about us. Attendees and vendors alike came over to chat with us and learn more about e-bikes and Magnum.

As the afternoon wore on, the rains set in. We demoed some e-bikes on increasingly muddy trails before the rain turned into thunderstoms, prompting Outerbike to shut down early for the night. 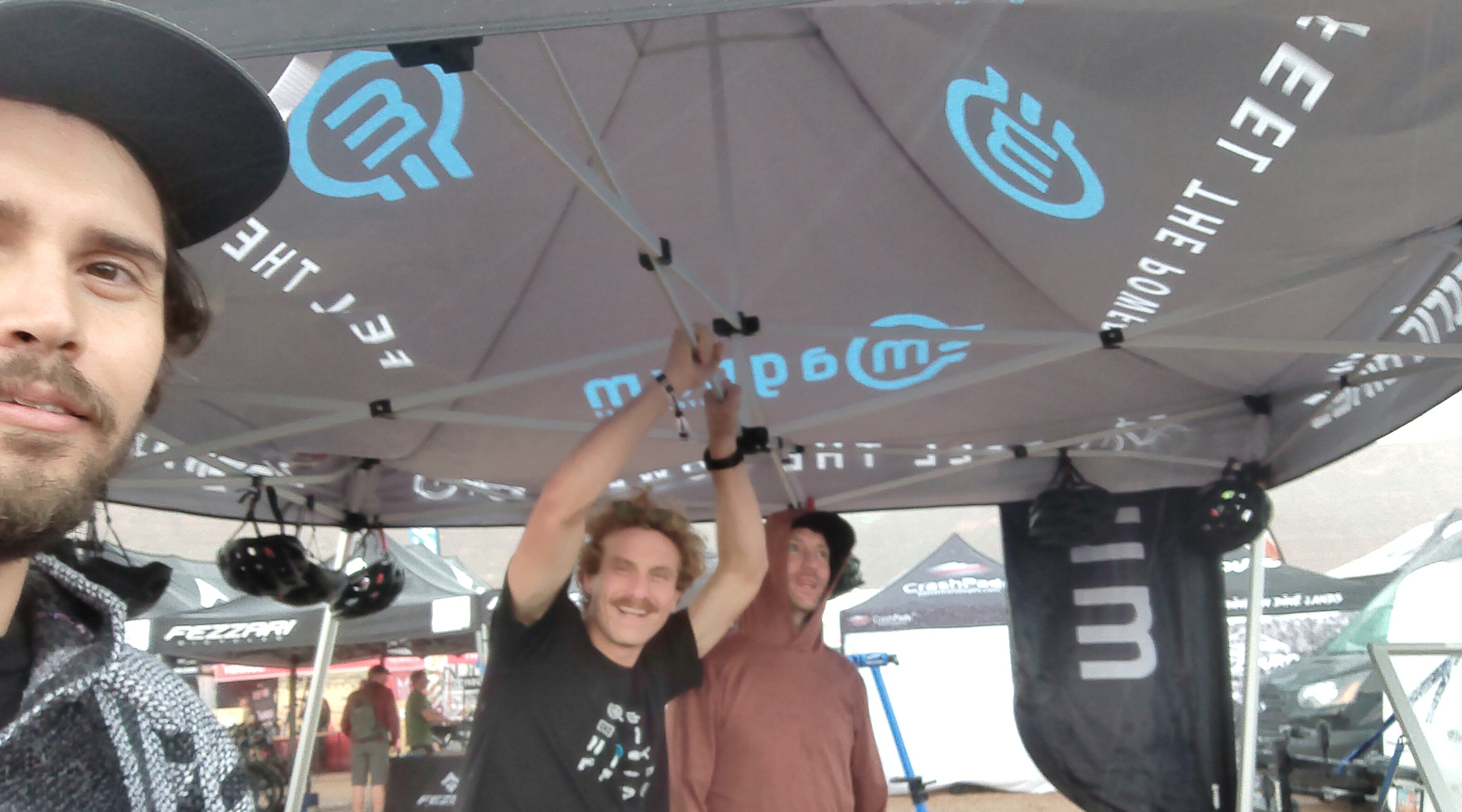 The Magnum crew holds onto our tent as winds pick up again in the Moab desert.

Days 3 and 4: The Heart of the Weekend

Saturday was an even better demo day for us. We saw the same afternoon interest from the crowds and got to meet some other vendors who wanted to demo, too. It was the first e-bike experience for many of these riders. We loved seeing their faces light up and the huge smiles at the end of every test ride. The weather was great all day, too!

On Sunday evening, after the final day of desert bike demos, two of our crew decided to head out for an evening ride.

The rain started up again, then the thunder and lightning. Safe in the hotel, the rest of our crew began to worry as thunderstorms turned into flash floods. About 3 hours later, the pair showed up at the hotel. They were completely soaked, but safe — and proud of another great ride. 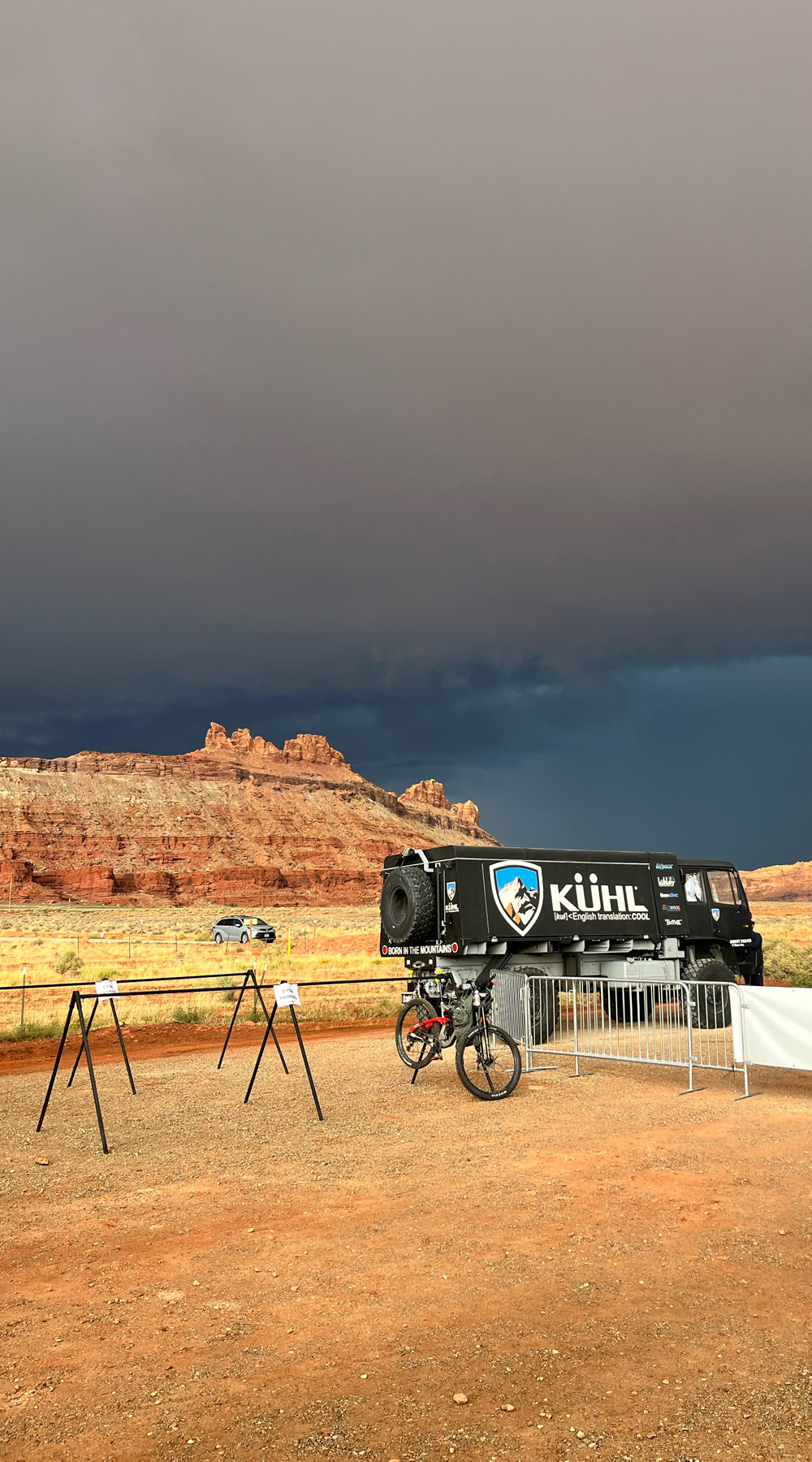 Thunderstorms close in on the Outerbike Moab grounds, September 2022.

And the lightning-strike photo you see at the top of this post? Our team captured that photo on that very ride.

While we brought many of our most rugged and durable models to the event, the Magnum Payload cargo e-bike was a fan favorite by far. The Magnum Pathfinder T, equipped with knobby tires to tackle the toughest trails, was also a big hit with demo riders. 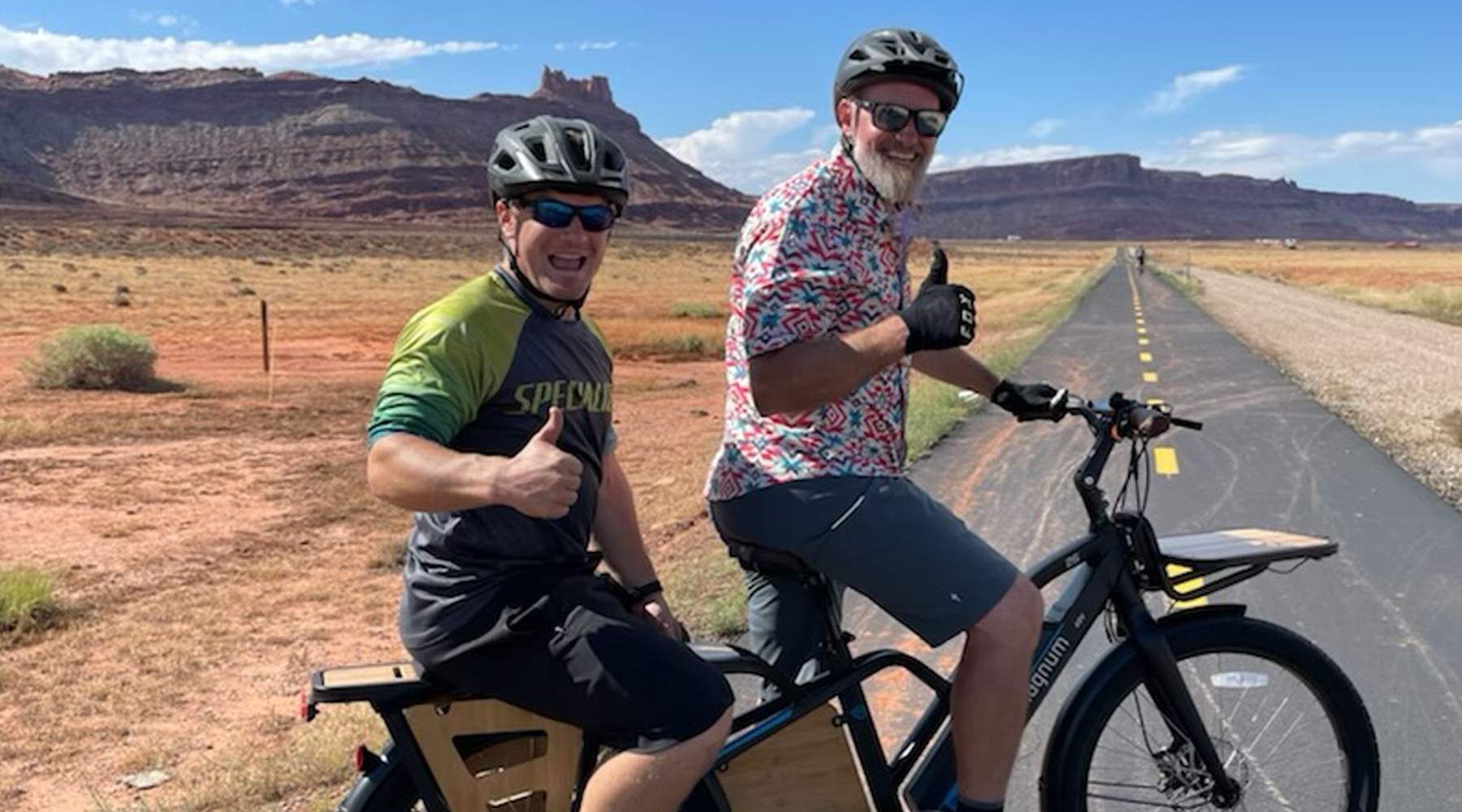 Testing out the Magnum Payload cargo e-bike at Outerbike Moab 2022.

Looking Ahead To Our Next Event

While we weren’t often attendees’ top pick for test rides to start, we loved meeting folks and changing their minds about e-bikes. Most riders who demoed Magnum Bikes for the first time were really blown away by the experience and came away with a new perspective on e-bikes.

So Outerbike fans — get ready to change your mind about electric bikes. We’re excited to attend more events and place Mountain E-Bikes right up there with your traditional bikes as titans of mountain biking.

Your cart is empty